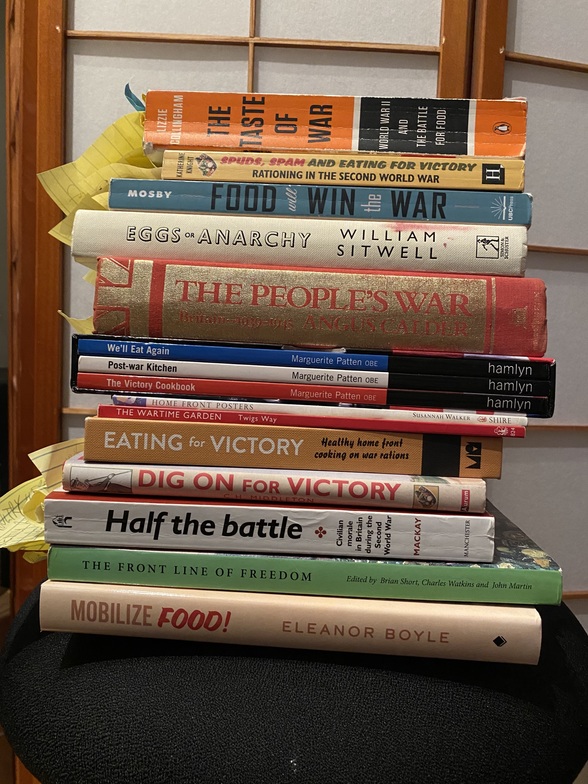 Hello again, and especially to Brock House members who attended my talk this morning on British wartime programs for food security amid conflict.

One attendee asked for suggestions of books on the topic of wartime food.

There are so many excellent publications, including films and additional media. As you see above, I've taken a photo of a few books from my office shelf.

(1) For a scholarly treatment (but fascinating and highly readable), there is none better than Dr. Lizzie Collingham's The Taste of War: World War II and the Battle for Food.  On the very first page of her Introduction, she shocked me by saying that in WWII, more people died of hunger and related diseases than died in military action. It's a chilling illustration of the centrality in food in conflict. (Note: This book is a few years old, was published in England, and is not easy to find. But I have an extra copy, and could potentially loan to any individual who wishes.)

(2) For a lighter touch but still well-researched and compelling: Spuds, Spam and Eating for Victory by Katherine Knight, and Eggs or Anarchy by William Sitwell.

(3) The People's War by Angus Calder is an overview of the war and the part played by average British people in defeating Hitler. Food is featured, and the book discusses many additional aspects of wartime life.

(4) If you're interested specifically in agriculture, I've been very impressed by the expert and detailed The Front Line of Freedom: British Farming in the Second World War, edited by Brian Short et al.

And there's so much more.  Please write, or call, to chat or for more about resources on this engaging topic, and thank you for your interest.  Email me at [email protected], or reach me by phone in Vancouver, Canada at 604.230.2561.