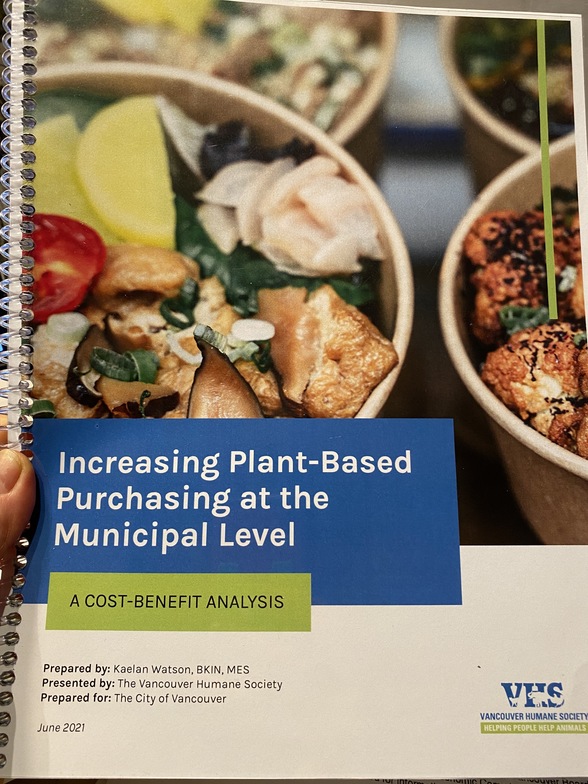 What a win for environment, public health, and animal welfare!

It's a small win, but a significant one.

Vancouver City Council has just voted to shift its food to be less meaty and more plant-based.  In a unanimous decision on Nov 3, 2021, Council supported a motion to replace 20% of all animal-based foods with plant-based ones in local schools, parks, low-cost meal programs, civic theatres, and city-sponsored events.

It's a great start, even though a 20% reduction in animal-source foods isn't actually enough to make our food systems sustainable. Recent international reports show that developed countries like Canada will need to scale back on meat production and consumption by at least 50% if the world wants to reach climate targets. But given most governments' reluctance to face the livestock issue, this is big.

Yes, livestock, meat, and dairy constitute a key climate problem -- and solution -- creating far more methane, nitrous oxide, and carbon dioxide than the production of any of grains, legumes, vegetables or fruits. But national governments have largely considered this topic 'too hot to handle,' given meat lobbies and consumers' attachment to burgers. It may be that cities are better positioned for brave and bold action here.

I had the opportunity to speak on the motion to City Council, including to Councillor Pete Fry of the Green Party who proposed the excellent motion in the first place.  Kickstarting it had been a professional cost-benefit analysis and report from the Vancouver Humane Society (VHS). Entitled Increasing Plant-Based Purchasing at the Municipal Level, it shows that the city would save a lot of money and a lot of emissions, plus contribute to animal welfare and public health, by replacing even just some  meat with plant proteins. VHS Campaigns Director Emily Pickett, who spoke impressively to the motion, showed that her organization's diplomatic determination gets results.

Read the excellent report that inspired this motion!

Get the report that motivated this motion here or at the link further down this page. I would love to see this report be modelled by organizations in other cities!