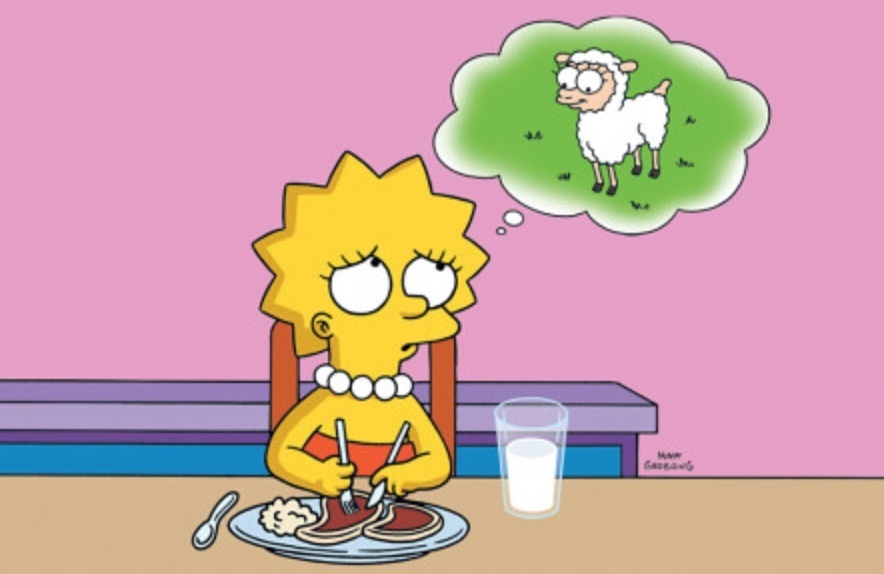 A friend of mine has decided to become vegan. Let's call her Lisa in honour of Lisa on The Simpsons who famously stopped eating meat after realizing that "lamb" on the plate was actually, um, lamb.

My friend Lisa had already been a long-time vegetarian, highly aware on food, and knew the scientific evidence that conventional animal agriculture is disastrous for the planet and public health. But she recently decided to do her best to cut out animal products altogether.

Personally, I'm not vegan. I consume small amounts of animal-source foods. But I applauded Lisa's aspiration to set strong sustainability food goals for herself and work toward them.

Then Lisa told me this story. Before the lockdown, she was in her office coffee-room with other staff members, some of whom she had chatted with in the past about food choices.  That day, she decided to add some cream to her coffee, and poured. Then came the accusation from a colleague: "I thought you said you were vegan!"

Can't we do better than that?

I think Lisa's colleague, and the rest of us, can indeed do better. We're all on a journey, trying to figure out how to walk lightly on this scorched earth. I'd prefer to support each other's attempts rather than police them.

It's been more than 25 years since I began thinking seriously about sustainable eating. It began when I read John Robbins' Diet for a New America, and like many readers before me, immediately stopped eating meat. The author's passionate concern for the environment, for a kind and a just agriculture, swept me off my carnivorous habits. By about page 10, I had determined to stop consuming the chicken, pork, and beef that had been ballast on my plate. Since then, it's been a journey and continues to be.

For years I doubled down on the dairy products to make up for meat. Then I realized that an annoying chronic condition of mine -- constant clearing of my throat -- was especially pronounced after I had eaten a bowl of yogurt or ice-cream. Somewhat reluctantly, I went dairy-free for a few days and was shocked to find that the throat-clearing had stopped entirely. Frankly, I have come to feel, all of us adults may be a little lactose-intolerant.

I eat well and you can, too.

These days I occasionally eat dairy products, in very small amounts. Vegan cheeses and yogurts are, it turns out, delicious. The vast majority of my meals are made up of grains, vegetables, pulses, and fruits. Dinner might be brown rice spiced with herbs and lentils, plus a sauteed mix of greens (try olive oil and balsamic reduction on top), and a tempeh-and-potato salad with my signature vinaigrette (veg oil, Zatar spice mix, garlic and Dijon mustard). I definitely do not go hungry, and have discovered countless wonderful non-animal-source foods.

For many of the past years I have eaten no meat or seafood. But every journey includes the unexpected. About 5 years ago, then, I started craving fish. Just once in a while. But I wanted it.  So I decided to go to the venerable Vancouver restaurant The White Spot and order a single slice of fish-without-the-chips.  It felt satisfying, and since then I've consumed a small portion of sustainable fish of some kind, roughly once a month. It works for me.

I don't call myself vegetarian. It doesn't matter to me whether others consider me vegetarian or not, or what dietary term others may apply to themselves.  I'm interested in moving beyond labels.

That's why smart people have devised words like flexitarian and reducetarian for those who eat much less in the way of animal-source foods than is the social norm.  And thankfully those norms are changing. People who know the science and want to help are consuming much less meat. Meanwhile, let's support each other in our journeys for better eating.

Susan about 2 years ago

I totally agree with you. Labels can really be intimidating, and we don’t need purity tests to affirm our degrees of sustainable eating! Words matter, so terms like vegetarian and vegan can be intimidating for some. Those whose diets consist of primarily plants can fit very nicely under the umbrella term ‘plant-based.’ It doesn’t imply 100% adherence, but it is a useful common denominator for those who eat mostly plants, whether by by environmental necessity or preference. Strict veganism or vegetarianism isn’t for everybody. But for the sake of our planet, we do all need to eat a diet composed primarily of plants.

Thank you for your ongoing educational work in the area of food sustainability, Eleanor!