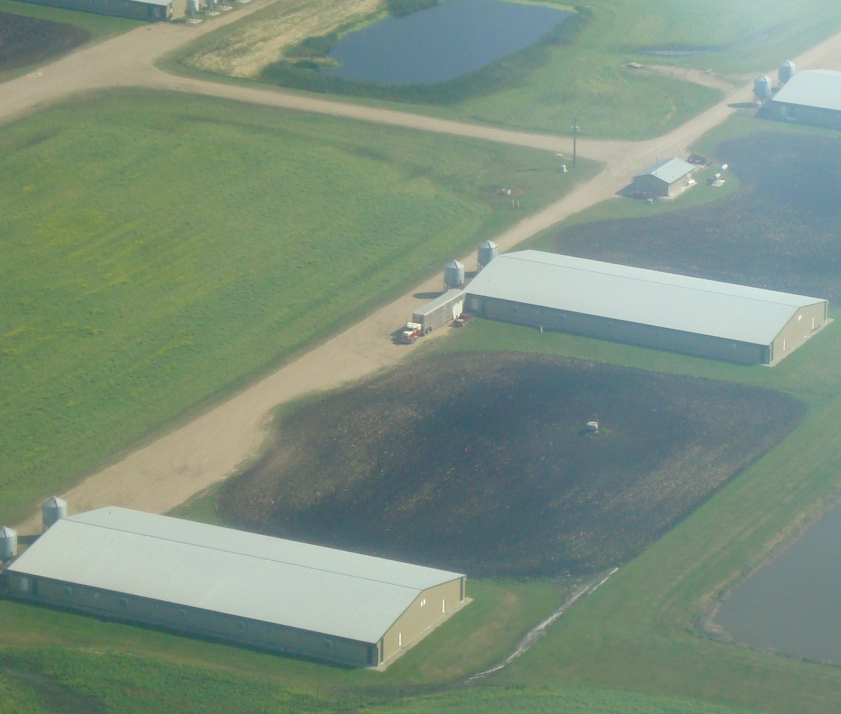 WHERE ARE THE ANIMALS? This is why we see so few actual chickens, pigs, or cattle when we drive through rural areas these days. Most of them are stuffed into buildings like these. I photographed this from a light plane over the Canadian Prairies while researching the topic of meat production.

The Connection Between Pandemics and Factory Farming

To westerners, the COVID-19 crisis seems to have originated at a distance and in other nations’ practices. But before we get too smug, let’s talk about factory farms.

That's the common term for intensive livestock operations (ILOs)—buildings packed with livestock penned shoulder-to-shoulder or wing-to-wing, being fattened as quickly as possible so consumers can eat meat every day. Factory farming originated and proliferated most quickly in industrialized countries. Whether we’re aware of them or not, ILOs dot the peri-urban landscape near most of our cities and towns. Unless you go out of your way to buy your chicken, pork, and beef from local sustainable producers, those products come from factory farms. And their relatively low retail prices don’t reflect the environmental and health costs to all of us.

Meat factories are bad for animal welfare. They’re also bad for our environments, considering how much feed those animals eat, how much fresh water they require, and how much manure and greenhouse gases they emit. But what’s the link to pandemics?

The truth is that ILOs can be breeding grounds for illness. Animal flus have already arisen in and raged through pig and chicken factories—including H1N1 swine flu in 2009 in a North Carolina pig operation, and H5N1 avian flu in 1997 and then again in 2015 in several crowded chicken-processing plants. Millions of animals have died or had to be killed during these waves of disease. The swine flu made the jump to humans, and thousands of people perished. Avian flus have generally not yet jumped to humans—which is fortunate because the fatality rate for that disease in chickens is roughly 60%. (Shapiro 2020)

What makes factory farms prone to development of influenzas? Here’s Michael Greger, a physician and researcher who has written extensively on influenzas and on animal-to-human (“zoonotic”) diseases: “If you actually want to create global pandemics, then build factory farms.” As he documents in Bird Flu: A Virus of our own Hatching, intensive livestock operations take animals bred to have similar genetics, pack them tightly together, drug and stress them so their immune systems are compromised, and fatten the chickens, pigs, or cattle quickly so there’s frequent animal turnover. Those conditions increase the likelihood that new pathogens will develop and spread, explains Greger.

“There has never been a single recorded emergence of a highly pathogenic flu virus in chickens kept outdoors,” said Greger at a University of Wisconsin event for medicine and public health. “Never once has a deadly flu virus ever seem to have arisen, that we know of, in an outdoor chicken flock.” (Greger 2007)

Other experts agree that when respiratory viruses find their way into livestock confinement operations, the viruses have ample opportunity to replicate, mutate, reassort, and recombine into novel strains. Although such viruses might eventually burn out in a human population, conditions in factory farms amplify them, helped by the continual introduction of new animals. Then human workers can potentially be infected.

So we can’t just ban certain animal-consumption practices that might have sparked the COVID-19 crisis and replace those with intensive livestock operations, says Peter Stevenson, chief policy adviser at animal welfare organization Compassion in World Farming and author of the just-released report Is the Next Pandemic on our Plate? What’s needed is a new approach to humans’ relationship with animals, he says, including keeping animals in “health-oriented” systems in which the wellbeing of the animal is prioritised to minimize stress and vulnerability. Such systems would also mean better performance on environmental metrics—less degradation of soil, water, and land, Stevenson argues.

Behind the scenes there’s another way that large-scale livestock production increases the probability of pandemics. That’s because much of today’s planetary deforestation is to grow livestock feedcrops. When huge swaths of forest are destroyed, so is wildlife habitat. And that brings humans into ever closer proximity with wild animal species.

Yes, We Can Do Something—Today

So, as with any problem that may seem overwhelming, what can any of us do? To eliminate a primary source of pandemic risk, we need to stop factory farming. You and I can help by supporting or working with animal and environmental groups on anti-factory-farming campaigns. Then at the individual and household levels, we need to cut back on our meat and dairy product consumption. Fortunately, there are so many plant-based alternatives that are delicious and provide plenty of protein and other nutrients. For meat and dairy products we do consume, we need commit to paying more for those that are healthier and more sustainably and compassionately produced.

Where can we find such animal-source foods? Some vegan critics say there’s no such thing as sustainable meat, dairy, or even fish. But if we do a little research we can find producers in our areas who raise livestock in ways that—compared with factory farming—are good for the planet and our health. In a near-future blog post that I’ll link to from here, I’ll say more about where to buy sustainably and compassionately produced meat and dairy in Greater Vancouver.

TO LEARN MORE ABOUT PANDEMICS AND FACTORY FARMING:

Farms Not Factories. 2020. If You Want Pandemics, Build Factory Farms.

Stevenson, Peter. 2020. Is The Next Pandemic On Our Plate? April 2020. CIWF: Compassion in World Farming.

Debra Weinstein about 2 years ago

This is excellent! So true that we are bringing this on ourselves... and then wonder how it all could happen.