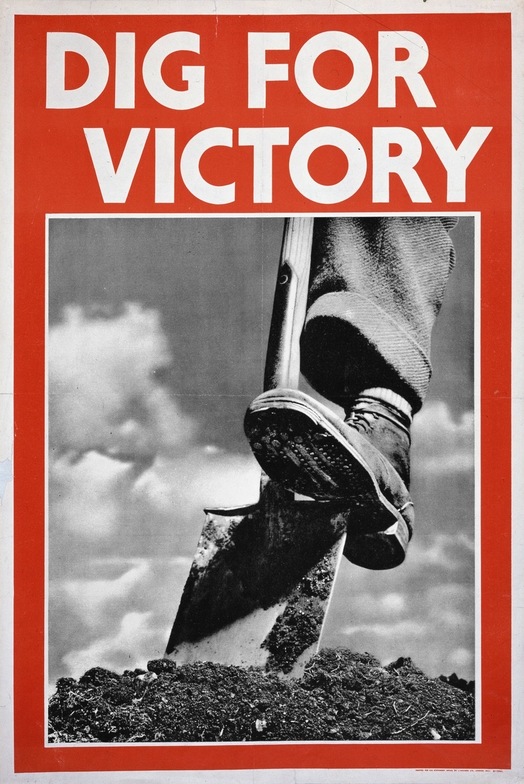 Green Party of Canada leader Elizabeth May inspired me today.

She was quoted in an article* saying that Canada, vis-a-vis climate change, needs to be on a war footing as was the case in the Second World War. What's needed, she says, is a multi-party "war cabinet." "Climate change is not an environmental issue, it's a massive security threat that requires taking bold action. We need to get rid of the politics."

These wise words from Ms. May moved me to share one of my favourite images from my large collection of wartime posters. This call to Dig for Victory is close to my heart for two reasons.

First, it’s from a period I’ve been writing about in my forthcoming book.

Entitled Mobilize Food! Wartime Inspiration for Environmental Victory Today, my book tells the story of Britain’s World War II Ministry of Food and its ambitious work in the late 1930s and beyond, when Nazi aggression threw Britain and all of Europe into war. Preparation for that war included a deliberate transformation of a national food system to feed the British population in chaotic times. And with the daily support and sacrifice of the country’s millions of citizens, it did.

As part of that project, British citizens were urged to grow more of their own, since food-import ships were being bombed and torpedoed — downing up to 400,000 tons of cargo per month by some estimates, plus countless lives. The situation was life and death, so Brits were rallied to dig, plant and harvest vegetables and more. As you’ll read in my book, home gardens soon churned out potatoes, carrots, berries, and greens to add to the nation’s larder in wartime.

Second – and no less importantly – it’s a powerful, concise message.

Sometimes messages like these were couched in humour, like one food-gardening pamphlet that showed how to make “Plots Against Hitler.” But the “Dig for Victory” message was simple and direct. It stated what was needed, expected even, of Britons. This memorable phrase tied strategic effort to hope.

For Britons, digging for victory in home gardens did even more than top up flagging national food supplies by a critical 10%. It built commitment and morale as the nation endured hardship, death among loved ones, and the very real threat that their democracy would be lost. It gave tens of millions of citizens a concrete and meaningful way to help in the war effort.

I know people today who want to do something to fight climate change, but aren’t sure what to do. There is no better time for leaders (from all domains) to clearly communicate how we can do our bit, and what we must do. That's why Ms. May's words are so timely and critical. Considering that our food system is wound up in impossibly long supply chains and generates more than a fifth of Canada’s emissions and far more waste than is necessary, growing more of our own food locally is a strategic response.

Today I see urban farmers in my hometown of Vancouver, and in so many other cities and countries. Like me, and maybe you too, they’re digging for a new kind of victory—over climate change, and for healthy environments.

Please feel free to share questions or comments here, or at [email protected]

Susan Angel over 3 years ago

Agreed. A mass mobilization is what we need. I look forward to reading more about this from your book. It’s good to see this article come up in my blog feed!