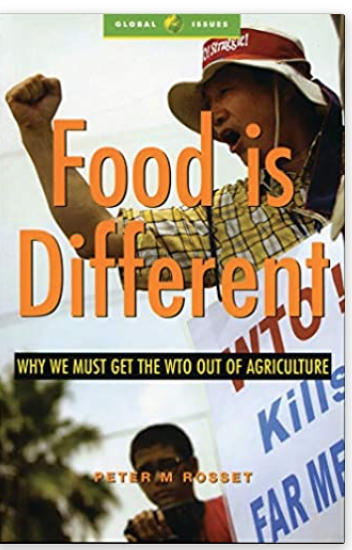 That's a phrase that has haunted me for weeks since I began preparing to speak at a community food-security event on January 28. The event was to introduce the Vancouver Jewish community to a newly-envisioned hub or centre that will update and widen the services of that community's food bank. As part of the event, the organizers asked me to share a few ideas on 'food security.'

Food banks are essential, but even when they are transformed into improved stigma-free community centres, they do not create real food security. Food banks do not give patrons the confidence that they will, on their own, be able to feed themselves -- by buying or growing or otherwise acquiring enough calories and nutrients for health and well-being. Food insecurity, and even the pain of chronic hunger, affects thousands in my city, millions in my country of Canada, and hundreds of millions in the world.

But it's not because of lack of food. There's plenty of food in Canada, which ships about half of its domestically produced food abroad, and there's plenty in most jurisdictions around the world.

We've got system problems. They stem from the fact that we put food in the hands of private enterprise (often multinational corporations) -- to grow, process, distribute, and retail it, despite the reality that companies' priorities do not include ensuring that everyone gets fed. Our societies treat food like any old consumer good with price tags. You can only have it if you can pay for it. This might be justifiable for cars and dishwashers, but food is a necessity of life.

That's also the name of a small but powerful book written by activist Peter Rosset 15 years ago, arguing that food should not be commodified and traded internationally like other goods when so many people are starving.

Ideas are on the table, most necessitating bolder leadership from our governments. There's nothing radical about this.  We welcome government input and management in education, in transportation, in health.  Meanwhile, food is more basic than any of these.

So we could put more money into the hands of people who are having trouble buying enough good food. This could be in the form of guaranteed annual incomes, or more robust social-safety nets.

We could be more ambitious and develop some form of public food system -- an idea supported increasingly by activist leaders like Paul Taylor, executive director of FoodShare Toronto. I first heard of this from Canadian civil-society organizer Debbie Field, who explained it as follows:  Most of the food system would remain in private hands;  this wouldn't be a takeover.  But a segment of agriculture would be devoted to meeting the basic needs of all Canadians.  The federal government would pay farmers to produce large amounts of a handful of healthy foods, perhaps lentils, barley, apples, broccoli, and cheese. These would sell retail across the country for well below market prices, available stigma-free to anyone. The program would improve food security and also boost population health.  Among jurisdictions that are doing this now is the Brazilian city of Belo Horizonte, whose far-reaching food access initiatives long ago earned it the nickname 'the city that ended hunger.'

I am excited by the idea of a public food system, and wonder whether we couldn't try a pilot project in a smaller jurisdiction rather than the whole country. Ideas welcome.

Improving food security is going to be tough.  But we can take steps, including in our personal lives. We can embrace and support bold ideas like a public food system. As well, every day, we can make sure we don't eat more than our share of the planet by:

If you're aware of a project that exemplifies the principles above or have questions, please drop me a line through my contact form on this site. I always love constructive conversations with my readers!

More than 80,000 British Columbians turn to food banks to help feed themselves each month, while experts estimate that about half of the value of food produced in this province is exported annually. Photo of the Port of Vancouver: MikoFox Photography on Flickr CC License Thank you for sharing these insightful ideas.

Good morning Eleanor! l am absolutely delighted to have found you again after a long lapse. As l was listening to the audio of Seth Klein's ground breaking A Good War l thought l heard your name in reference to a footnote. The audio includes all footnotes which are extensive...........of course, l thought/hoped you'd be on the front proposing we adopt wartime measures in relation to food! This has been your turf for years....bravo for carrying on. I look forward to talking with you. Be well my friend. H