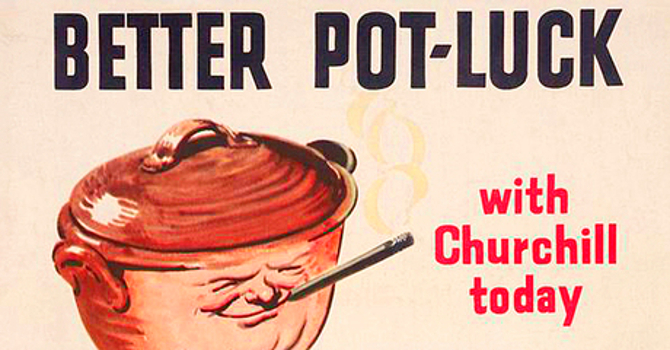 Audrey Ostrom hails from what she calls “very ordinary, middle-class family” in Durham, an ancient city in the centre of a mining county in northeast England—not far from the Scottish border. Although she was just seven when World War II broke out, her memories of the British war-time food system are indelible.

“FFMF1493: that was the registration number on my own food-ration card,” says Audrey. “Even at that age, I could have repeated it in my sleep. It's engraved in my noodle!”

Audrey describes how it worked: Everyone had such a number on their food-ration booklets, and it served as a personal ID. People were urged to keep that number on their person, perhaps engraved on a bracelet or necklace, as identification (along with a gas mask!) in case their home or neighbourhood was bombed. You'd register the number with local food vendors and, during the week that your ration tickets were dated for, redeem them by allowing vendors to remove them from your ration book. If you were a regular customer of a given merchant, you might also get better cuts of meat, a heads-up in advance when items in short supply were expected to arrive, and door-to-door delivery of your order by a boy on a bike.

“And once your tickets are gone—too bad!” relates Audrey.

Rationing extended to items like meat (including bacon), sugar, milk, fats, eggs, and soap. Powdered milk and dried egg powder were not especially palatable on their own, says Audrey, but were a lifesaver in cooking. People queued for foods that were rationed as well as for unrationed foods that were unreliable in supply—like fish. Later on, when peace was declared and supplies from the USA ceased, supply networks were rearranged yet again and bread and flour were also rationed.

Ration books instructed users that when they ate at restaurants, lived in a hotel, or went on holidays, they were to allow the staff of the establishment serving them to detach the specified number of food-ration tickets—not that this applied to Audrey's family.

“We ate at home,” explains Audrey, chuckling at the very idea that her family would have eaten out, much less gone on holidays or lived in hotels. “The average person did not go to restaurants or eat out like they do today. It was totally different for the likes of us.”

“The average person did not go to restaurants or eat out like they do today. It was totally different for the likes of us.”

Food took on new value. People would trade small amounts with friends and offer it as a gift—such as a little package of tea. Audrey recalls that, at a time when people were allowed one egg per week, she won a competition whose prize was half a dozen shell eggs: “It was gold to me!” Although some people were buying eggs from farms, Audrey's family did not. “We lived next door to a mixed farm, but we never had eggs from them—it was illegal to do so,” she says. “People observed the law.”

With national food security imperilled by war, the keeping of pets was discouraged. While Audrey's family was able to maintain a budgie in a cage with seed that they would scrounge after threshing machines went by, other families' pets died (or were put down) because there wasn't enough food for them.

Wartime food required not only rationing, but producing more food locally—because Britain's dependence on imported foods made it vulnerable not only to hunger but also to direct attack. A friend of Audrey's mother lost her husband when the ship he was on, which was bringing food to Britain from the US, was attacked by German forces. Many merchant navy ships suffered a similar fate.

Everyone pitched in—and every bit cultivated

To increase Britain’s food security, everyone had to pitch in. Audrey remembers how every available empty piece of land was being cultivated, and how her father—outside of his full-time job as a postmaster—turned over the heavy clay soils of an entire field by hand, using a spade and fork to plant potatoes, raspberries, strawberries, carrots, parsnips, turnips, beans, and peas. “We were in the north, where you couldn't grow tomatoes without cover,” she says. “Some people who had a little money had greenhouses for that.”

Children helped with harvesting and by picking wild raspberries and elderberries, and Audrey's mother preserved everything she could. As imported fruits like oranges and bananas were rarely seen during the war, people were encouraged to forage for rosehips and/or take rosehip syrup to supplement their vitamin levels.

Audrey concedes that Britain's wartime diet was a bit monotonous and “you would have always liked more”, but the food-system was well-organized—and worked. “We were never starving,” she says. “Everybody grumbled to a certain extent... but people knew: We're an island nation, and we have no choice.”

Everybody entitled to food

And for many Britons, adds Audrey, the system was a step up. “The Depression was just ending when war broke out, so there were a lot of people that were hungry and not eating a good diet,” she explains. “So when food rationing began at the outbreak of war, it meant that everybody was entitled to a certain amount of food. Generally speaking, the diet for the average British subject was better during wartime than it had been during the Depression.”

“Generally speaking, the diet for the average British subject was better in war than it had been during the Depression.”

Audrey admits she's perplexed by contemporary attitudes about food. “When I came here [as a newcomer to Canada], the amounts I saw people eating boggled the mind,” she remembers. For her, food is something you take just enough of, and use carefully— repurposing or composting leftovers. “When I'm in a restaurant ... I just shudder at the waste of food. People order too much, the portions are too large, and I gather it's even worse in the US. ”

As someone schooled in home economics, Audrey is sorry that today, such education is seen as a frill. “That's why there's ignorance when people food-shop,” she observes. More and earlier training, she believes, would be a big help to Canadians to live healthier lives.