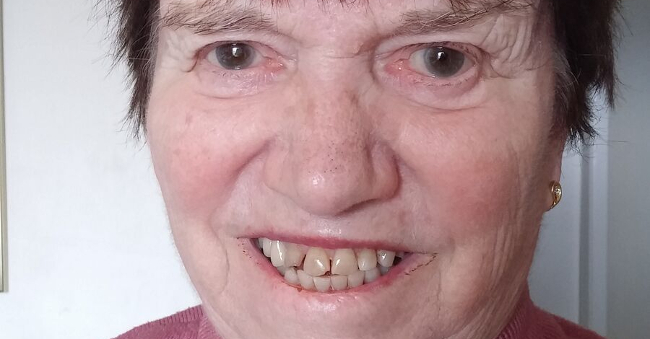 Grethe (née Wissing) Jacobsen's story shows how a level of food self-sufficiency and a tendency toward cooperation helped insulate her family, and to a degree, her native Denmark, from the ravages that other countries experienced during World War II.

“Hitler came to power in the same year that I was born,” relates Grethe, the third of eight children born to a farming family in rural mid-Jutland, Denmark. She was just seven on April 9th, 1940, the day that German planes flew in low to her country. With its small population, its one land border shared with Germany, and no hope of mounting a successful military resistance, the Danish government agreed within hours to limited cooperation with occupying forces in exchange for independence in its domestic affairs. And because racist Nazi ideology had classified Danes as part of a superior Aryan race, Germany did take a largely hands-off approach to Denmark's internal politics.

During the ensuing years of German occupation, Denmark was forbidden to trade with Britain, its main trading partner and the biggest market for the country's primary export: agricultural products. Key food exports—particularly meat and butter—were redirected toward Germany, and rationing was implemented locally. Yet somehow Danes were the best-fed people in Europe during the war, and under a system of price controls negotiated with Germany, Denmark actually exceeded German expectations of food productivity.

“Our farm was small by today's standards – just 32 tøndeland [about 18 hectares],” remembers Grethe. Conditions were spartan but livable. The family's small farmhouse was a four-kilometre walk from the children's school and 10 kilometres from the nearest sizable town of Randers. With no fertilizers save for animal manure, no gas-powered machines or vehicles, one horse-drawn cart for family trips to town, and sustained human and animal effort, the Wissings coaxed a lot from their heavy clay soils: vegetables and fruit (including apples, pears, plums, and berries) for their own use, and milk, eggs, chicken, beef, pork, and bacon for themselves and for sale. Lacking refrigeration, the Wissings ate in season and used traditional arts to preserve the rest. Modest farm earnings were used to buy bread, fish, cheese, and critical household items, and pay taxes, and nothing was wasted. Given the Wissings' distance from neighbours and scarce resources, the kids relied on each other—and their vivid imaginations—for fun. And like all Danes, the Wissings continued to benefit from the country's socialized healthcare system.

Grethe is still awed by how her mother—who had grown up farming, unlike her well-educated father—largely managed the farm while raising eight children. She even found time to bake an array of cakes and cookies that local women were expected to serve at any social occasion. “I give my mother a lot of credit, for having held it all together,” relates Grethe. “She was very strong, and with eight kids, she had a big job!”

With wartime trade restricted and rationing in place, many imported foods, like coffee, were in short supply. But farmers were allowed to consume the food they'd produced, so while the Wissings' diet was less varied during the war, no one went hungry—in fact, they were able to give some of their ration cards away to community members. It was common for people to pass on things to others that they no longer needed—like clothing that children had outgrown. Recalls Grethe: “We were raised to look out for other people, and each other.”

A generalized sense of fear and imperilled freedom

In occupied Denmark, looking out for each other became more important than ever. A generalized sense of fear and imperilled freedom was pervasive. “The feeling of being unsafe was just how I grew up,” says Grethe.

Nazis had a relatively low profile in rural regions, but community members were very aware of developments elsewhere, like targeted bombing raids, the arrest of many Danish citizens, and the German takeover of the Danish police and internment of many of its members in concentration camps—where many died.

Although more than 6,000 Danes perished as a result of the War, citizens found large and small ways to resist. King Christian X, described by Grethe as “a god to us, because he stood up for the Danes in a way we were all very proud of”, habitually toured Copenhagen on horseback without a guard, in a show of courage and commitment to Danish sovereignty. The Danish government rejected German demands for a death penalty, for laws discriminating against Jews, for German military courts to have jurisdiction over Danish citizens, and for use of Danish army units. Danes actually scuttled 32 of its own large ships to prevent them from being used by German sources (15 of which were raised and refitted by Germans). Danes secretly spirited many Jewish people out to safety in Sweden on fishing boats, and an underground press thrived.

In Grethe's community, farmers would send their animals off to graze out of sight and bury their family heirlooms or valuables so that they wouldn't be stolen by occupying forces. Community members whispered to each other about quiet moves to complicate occupiers’ lives—“dropping” something on a road to obstruct the soldiers' passage, setting a soldier’s haybale on fire, or giving those who demanded food the worst pieces of meat. She remembers how her parents sought to calm her and her siblings when they paled or ran away from Nazi soldiers who would pass by, help themselves to the family's food, and even pick up young Grethe. “I was so afraid they would take me away,” remembers Grethe. “My father would tell me that the soldier had a little girl at home and just misses her.”

When the war ended, trade opened up again. Grethe remembers her first encounters with imported foods, like bananas and oranges, at age 12. “We found oranges to be really sour at first,” she chuckles. “Oranges were—what would you call it?—an acquired taste.”