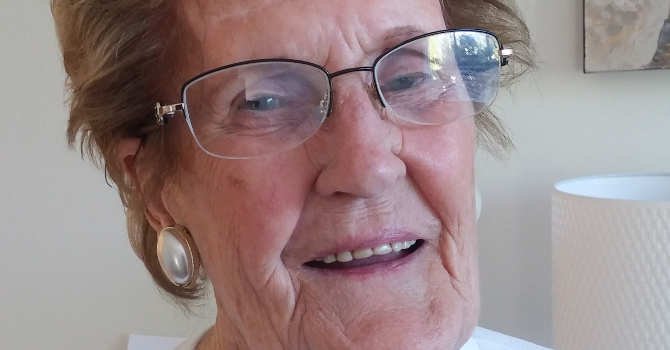 In 2015, Helen Melville (née Smith) Young was moved when reading a small news item that would probably have escaped the attention of many people. According to the report, a plaque was being erected at the Glasgow Central Station in her native Scotland, to commemorate the thousands of servicemen who had departed from there to serve in World Wars I and II.

Helen was on that crowded station platform saying goodbye in 1939. Now 86, she recalls that she was just seven when she, her mother, and her older sister went to bid farewell to her father who, by serving in the British Navy, was heading off to war. “I remember fellow naval officers saying to my mother, 'We'll look after your husband,'” says Helen. “And just a few weeks later, many of them had been blown to pieces.”

“I remember fellow naval officers saying to my mother, 'We'll look after your husband,'” says Helen. “And just a few weeks later, many of them had been blown to pieces.”

At the time, expectations were that Glasgow, like other British cities, would soon be strafed by Nazi bombers. Seeking safety, Helen's family quickly packed up and relocated from their home in the city's tenements, to Helen's grandparents' home in Crieff—a village about 80 kilometres to the northeast in Perthsire. The Smith family was among thousands of families who fled to outlying areas that were thought to be less vulnerable, and for good reason: Glasgow sustained 11 bomb attacks in the years to come. They felt fortunate to be together, given that many children whose parents could not leave the city were systematically evacuated and assigned by government to unfamiliar households that had the means to care for them.

Helen, her mother, and her sister resided for more than three years in Crieff. “I loved Crieff,” says Helen, remembering that she and her sister attended school for half-days only as schools were operating with fewer teachers but at double-capacity to accommodate so many additional children.

However, war was ever-present there also. Residents could sometimes see ominous red skies over distant Glasgow, and were required to cover up every bit of light emanating from windows at night in order to be invisible to overhead bombers. Air raid sirens would go off regularly, sending people scurrying toward shelters, and gas masks were carried by everyone, including children.

Everyone worked for everyone

Helen recalls community efforts to bolster troop morale. Schoolchildren knitted warm socks, scarves, and mittens that then were collected and sent to Helen's father, who redistributed them to appreciative crews on the minesweepers. At Crieff's hydropathic facility, Helen's mother supported convalescent soldiers who had been rescued from Dunkirk, through visits, sewing on badges and buttons, and writing letters. “Everyone worked for everyone,” relates Helen.

Living in the countryside meant having a few more food options under the food rationing system that had recently been implemented by government. “Everyone grew vegetables, and all household livestock had to be contributed to the government food program,” explains Helen.

“I don't remember going hungry, although we rarely could buy a few sweets. My friends and I would buy a few cough sweets from the pharmacies, natural licorice, or even cinnamon sticks. We had to queue up each day at the shops with ration cards, which had become a way of life."

Food rationing wasn't easy but the system was widely respected, remembers Helen. “In this way, everyone was given their fair share. Even pregnant women were given concentrated orange juice and vitamins.”

In 1943, Helen's father received a medical discharge from naval service, resumed his work in the postal service, and welcomed his wife and daughters home from Crieff. As the British government's "Dig for Victory" campaign urged people to produce more food locally, he grew hardy vegetables, like carrots, turnips, and cabbage, in an allotment garden, while Helen's mother grew tomatoes and parsley inside at home.

Something out of nothing

Helen admires how people made do in times of scarcity. “Housewives knew how to work with food, and absolutely nothing was wasted. People listened religiously to radio broadcasts that gave information and recipes on how to make something out of nothing. My mom was a great cook and baker. Even if she had only a few drops of milk and a little flour, she would make scones. We made soap of out potato peels!” she says.

Helen also cherishes memories of contributing to the country's food production as an 11-year-old in 1944. With so many men away in military and naval service and women occupying their vacated positions (including munitions production), there was not enough farm labour to bring in the harvest. Schoolchildren saved the day.

“Our entire school, including our teachers, was transported to a farming area in the beautiful countryside of Perthshire to harvest potatoes. We were accommodated in a large Boy Scouts' camp, and for three weeks we were in the fields every day by 7:30 a.m. I loved it! It was hard work, but we were so proud that we were helping to save our country from starvation. The government paid us a nominal sum for our work.”

"It was hard work, but we were so proud that we were helping to save our country from starvation."

Helen later went on to marry, have a family and a long career in administration in Africa, and emigrate to Canada in 2004. She still marvels at how, during World War II, the British government managed the food system when importing it put both lives and merchant ships at risk. “It was a miracle,” concludes Helen. “We can be thankful to the British government for ensuring no one went hungry.”