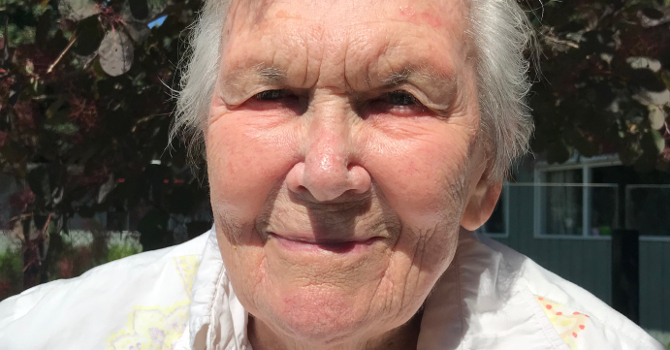 Louise (Simpson) Mardon wistfully recalls an extravagant family meal in England in the week leading up to the start of World War II. There was a huge spread, with flaky Cornish pasties, juicy pork from the family's own pigs, ripe fruit, local Devonshire cream, and more. “My mother said, ‘Just look at this food, everyone. You may never see this much again.’”

"Just look at this food, everyone. You may never see this much again."

A sense of foreboding

Those words reflected a sense of foreboding over all of Britain including Barnstaple, the North Devon market town in southwest England where Louise was born in 1922 and raised with her two older brothers. At a time when Barnstaple locals were usually looking forward to annual community events like the ‘goosey fair’, which abounded with livestock, agricultural produce, and entertainment, they were now expecting war—and the scarcity it would create.

Louise, now 96, still has vivid memories of the events that followed. When war broke out in 1939, she was 16 and had been looking forward to starting her studies at Oxford University, where she had already been accepted. Instead, she joined millions working directly in the country’s war effort by signing up for the national army. As a member of the auxiliary territorial services, or ATS, Louise learned to use complex equipment to spot enemy aircraft, and mathematics to estimate their flight patterns. Along with other young ATS women, Louise taught many men how to become more accurate in making those kinds of predictions that were important to British defense. “You were sent out to places on the coast,” said Louise of her time in the ATS. “It was isolated, so you’d make friends with the locals who sometimes would ask you to supper.” Louise recollects one place in Wales where a nearby family invited her and her fellow service members for meals. The mother made special dishes for them—sometimes lamb chops, because in that remote area they could kill a sheep without anyone being the wiser. “The Ministry of Food wouldn’t know!” she said with a smile.

Every bite accounted for

Such indulgences were discreet, because throughout the war and for some years afterward, everyone was subject to rules from the Ministry of Food. Virtually every bite needed to be accounted for so that the nation could feed its almost 50 million citizens during the tumultuous and unpredictable conflict. Yet there was enough flexibility in the system to allow rural consumers to occasionally cull wild animals or livestock.

Growing food was crucial for the whole population, and those who had access to a plot of dirt did their bit for domestic production and food preservation. Louise fondly remembers her father tending the family vegetable garden, making a challenge of seeing how long the runner beans could grow before he harvested them. “Same with the peas,” said Louise. “We used to urge him to pick them when they’re young. They’re more tender that way.” Family members had good-natured disagreements on that topic. Families also had root cellars for cooling turnips, potatoes, carrots, and the like.

Rationing was a reality for numerous staples, such as sugar and tea. Louise remembers a scarcity of many foods, including her favourite dessert: rice pudding, made creamy with milk and juicy sultana raisins. Though many beloved meals were rarely available during the period, Louise agrees with historians that most British consumers supported rationing for the sake of the war.

In the army, Louise and her colleagues often got Spam, the cooked and canned meat substance that replaced more desirable foods. “You’d get a tin of Spam and put it in the baking dish, make sage-and-onion stuffing with applesauce, and pretend it was roast pork. And of course you’d also make a Yorkshire pudding,” said Louise. “You managed. You used your imagination.”

"You managed. You used your imagination."

Their imaginations were so productive that, after the war when rationing was still in place and cooking fats hard to find, Louise and others obtained medicated paraffin, a mineral oil product used in health clinics, and substituted it for butter in sponge cakes. “Then the Ministry of Food got onto this, and soon you needed a medical certificate to get that. Anytime we found a loophole, they’d find a way of plugging it!”

While stationed in rural areas, Louise found herself meeting many members of the Women’s Land Army (WLA)—an organization created by government to recruit (and sometimes, conscript) women to help meet war-induced shortages of labour in farming and forestry. At pubs and village dances, Louise was fascinated by stories shared by WLA members known as “Land Girls”, many of whom had come from urban areas. She heard that living conditions varied wildly. She was told that some Land Army recruits lived in “lovely comfy farmhouses with kindly farmers’ wives, while others were out in the barn and at the mercy of some surly farmhand. Then they were up early in the mornings collecting eggs and feeding chickens, and getting chased by geese.”

The WLA was small at first, observed Louise, because many young women shied away from work they believed would be dirty. But with support from 4H rural training programs for youth and the energetic Women’s Institute, a civic organization that brought women together to work on favoured community projects, the program grew. As the Land Army increased in size and influence, assertive recruits “kicked up a fuss” so that members got proper uniforms and improved living conditions.

Louise was enthralled by Land Girls' tales. Some of them had to go “ratting”, she said with a grimace, chasing rats that would otherwise eat into harvests. But helping with lambing was a task they enjoyed. Even in the snow, they’d go and fetch the lambs, bring the little animals into the farm kitchen, and feed them with bottles of milk. For WLA recruits from the city it was a transition, but most got accustomed to rough conditions and startling new experiences, such as working alongside prisoners of war from Germany and Italy. Louise remembers that the young women she met enjoyed meeting the Italians, who loved food and introduced them to fresh rather than tinned spaghetti. Some of the women took mechanical courses and learned to drive the tractors that were beginning to replace horse-and-plow agriculture. For many women, these were liberating experiences.

Contributing on the "home front"

Louise recalls how other citizens found alternative ways to contribute on the “home front” to food security. Domestic gardeners like Louise’s father grew substantial amounts of food. In addition to caring for evacuees and raising money for key causes, members of the Women’s Institute preserved fruits and vegetables through canning and making jam.

The war profoundly impacted everyone, acknowledges Louise, including herself. As a 16-year-old watching friends going off to war and wondering what would become of them all, Louise expected that in her new military post she would be “inducted into the elite circle, given great mysteries to work upon, and in no time flat be an officer of some rank.”

“Dream on!” she reflected wryly in her 2017 memoir, where she contrasted her imaginings with the reality that she (along with “23 other innocents”) went on to live: endless rules, regulations, marching lessons, and those “itchy khaki uniforms.” But Louise has no regrets, and is forever marked by her experience of military service with the aim of being “sent out into the world, ready to defend our shores.”