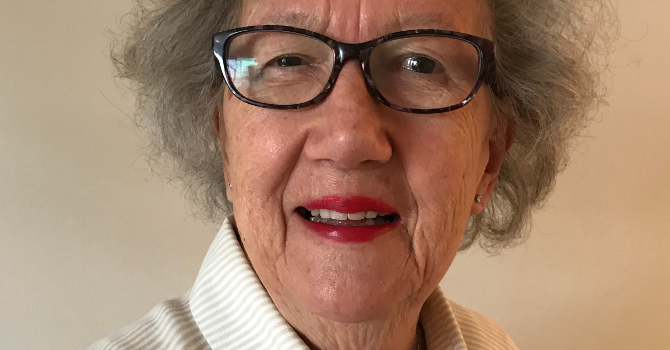 Margaret Jackson lives by the values she learned in Britain during World War II. “I never leave a light on in a room when I’m not there. I never cook more than I can eat,” she says. “I never throw food away. I can’t even stand throwing away a piece of parsley.” Though waste is now common, Margaret’s childhood in wartime London gave her the discipline to act carefully. Even these days, when towels are worn she cuts and re-sews them into oven mitts. When she needs writing paper, she reaches for pages that have already been used on one side.

“Today everyone’s being encouraged to re-use and recycle,” she says during an interview at her home in West Vancouver, B.C. “It’s natural for me. And there’s nothing obsessive about it. These are life skills that we learned. None of them are a chore for me.” Frugal living was deeply felt and has probably given longevity to many in her generation, she adds. “It was a way of life.”

“Today everyone’s being encouraged to re-use and recycle. . . . These are life skills that we learned. . . . It was a way of life.”

Born in 1933 in north London as Margaret Tourlamain, she lived with her father, mother, and younger brother; a second brother was born during the war. Six years old when the conflict began, Margaret lived in the city for the duration after her parents decided not to evacuate their children to the countryside. “They decided we would all stay together,” explains Margaret. That was in contrast to industrial areas such as East London, which would be targets for German bombs and where children were more likely to be evacuated to safer locales. Food was a daily concern for families in a country at war. One of Margaret’s strongest memories was of queuing at the grocers for rationed eggs, butter, and meat—and hoped-for extras such as vegetables, fish, and fruit. For many, the experience was stressful and tedious—but not for her. Standing in line with her mother, Margaret would listen to shoppers chatting and exchanging information. “Everyone was very respectful,” she recalls. “People were patient. We just stood in line. There was a sense of co-operation, and that's where news got shared.”

When you got to the front of the line, remembers Margaret, you’d ask to purchase your rationed items and also see what vegetables might be available that day to supplement what your family could grow. Occasionally there was rabbit for sale, which was tasty but had a lot of bones!

That was before self-serve supermarkets with aisles of prepared foods, she points out. In England in the 1940s, shopkeepers stood behind the counter, and homemakers approached them to list off the family’s desired items. The shopkeeper would locate and bring each tinned or bagged item to the counter, then cut the correct amount of, say, rationed butter, weigh the bacon, and wrap any small amount of meat in newsprint. It was personal service but it took time.

"During the war, I learned discipline and I learned organization."

Margaret recalls when she was only seven, wheeling her doll’s pram to the store alone and lining up herself to obtain the family food. “During the war I learned discipline and I learned organization. Children were so adaptable,” she says. “We also knew that it was a question of survival, that we had to stick to the rules. For example, you could never be late going anywhere, because people would be worried that something had happened to you.”

Diets at the time were basic and tended to be bland, but eaters got their nutrients. Staples such as powdered egg and milk were fortified with vitamins and minerals, but never tasted as appealing as fresh milk and whole eggs.

“We ate what was put in front of us,” relates Margaret. “There were people who could have eaten more. But there were no obese people. And nobody starved. However, we dreamed of a day when we might have chocolate.” Occasionally the family would indeed obtain a Mars or KitKat bar, which their mother would cut into seven pieces for the week. Each day every family member would receive a morsel of that day’s allocation!

Amounts of allowable rationed foods changed occasionally through the war. Keeping track of the family ration books was Margaret’s mother who was also pregnant in 1944 and therefore obtained supplements of cod liver oil, orange juice, and calcium tablets. She shared these with the children, and Margaret reports that was the only time during the war that she saw orange juice. Even some items that were not rationed, such as fish, were difficult to obtain due to the chaos of conflict and disruption of normal food supplies.

Prime Minister Winston Churchill has always been a hero to Margaret. “He was the right person at the right time -- exactly what was needed. Churchill encouraged us to go about our daily lives as normally as possible. But he also galvanized us to ‘Dig for Victory,’ to plant vegetables and feed ourselves as well as possible.”

The government made land available all over the country, and in London that included local parks and railway embankments. “Anywhere there was soil, it was utilized,” says Margaret. Citizens even tilled the sites of bombed-out homes, pressing on amid the chaos and turning over soil to grow vegetables. “We had to be self-sustaining.” On lampposts and in shop windows, placards would urge residents to Dig for Victory.

And everyone took part. Children such as Margaret would be given tasks such as catching the Cabbage White butterflies that might eat the crops. Children would also bolster food supplies by scampering through city laneways and picking wild rosehips, which could be made into syrup to augment sugar rations.

Margaret in front of her family's Victory Garden

Along with Churchill, Margaret’s heroes included merchant sea personnel, who bravely stewarded ships of food from the United States and Canada—risking their lives to try to keep Britain fed.

War was a demanding teacher of Margaret’s lifelong values of conserving resources and acting with care:

After the war, Margaret trained in England as a nurse and eventually ended up in Canada. Years later, she recalls extraordinary detail. Everybody wore a bracelet with an identification number, says Margaret: “Mine was NQCX646.”

The deep memories give her what today is an environmentalist perspective. She gets upset when she sees or hears of food waste—like one recent news report that documented the massive global waste—as much as 40% of edible food—while some people go hungry. Individuals could do more to minimize that, Margaret feels, as could restaurants, hotels, and shops in our time.