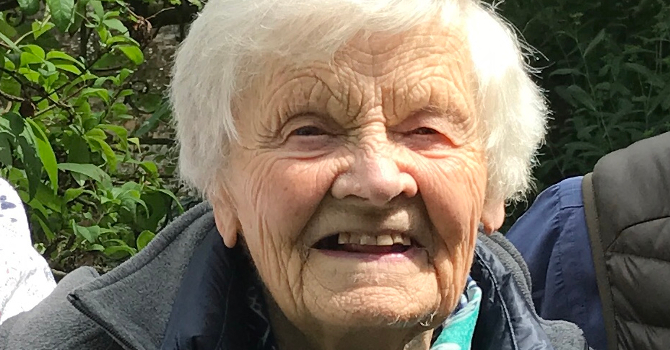 Olwyn (née Wynne Finch) Wake of White Roding, England was 14 years old and living with her family in the central London borough of Westminster when World War II began in 1939.

She is proud of the significant contributions her family made on the home front—for example, by sheltering some 20 children who had been evacuated from the city of Liverpool while it was undergoing bombing by German forces.

Similarly, the Wynne Finch family embraced the British effort to rapidly increase local food production to reduce the nation's vulnerability to hunger. That was needed largely because German submarines were attacking merchant ships that brought food to Britain, decimating human lives and food cargos. So devastating were the losses, says Olwyn, that Prime Minister Winston Churchill was worried that the nation wouldn’t have enough to eat.

Olwyn's mother, Alice Mary Wynne Finch, joined the War Agricultural Committee, where she earned praise by colleague from the Ministry of Agriculture for “going at [Committee work] hammer and tongs” and being very conscious of the challenges faced by the British Navy. In that role, she took charge of all the young recruits that comprised the Denbighshire, Wales unit of the Women's Land Army—a national campaign that sent teams of young women to work on British farms that were suffering a critical labour shortage as a result of the war effort.

We dug for victory

“The Ministry of Agriculture was encouraging every cottage that had a little plot of land to grow their own vegetables,” remembers Olwyn. “So we 'dug for victory'!”

Olwyn describes how people found additional ways to source more food locally. Those with extra space raised pigs, which were fed on scraps like potato peelings. Imported fruits like bananas and oranges were rare, but there were plenty of domestically grown apples that would last for months when properly stored. In rural areas, large landowners looked the other way on locals hunted on their properties for wild rabbits, which were a nuisance to crops. People gleaned grain fields to feed their chickens.

Olwyn also remembers the wartime food-rationing system. It covered staples like sugar and eggs, and there was a limit of just one shell egg per person per week. Rationing was a fact of life which most people complied with. But a friendly butcher might occasionally give you a little extra, Olwyn smiled.

Powdered eggs were used for baking, but if you could get into the countryside and had the means to buy fresh eggs, says Olwyn, “every cottage had some.” Fats were tightly controlled: for example, one personal weekly ration of butter was about a two-inch cube. Some meats were rationed but offal was not, so consumers could buy kidneys and liver at the shops. As someone who'd always loathed meat, Olwyn was happy to hand off her meat rations to other family members.

Over the course of the war, Olwyn finished her schooling, trained in typing and shorthand, found work, and moved into a shared flat in London—taking her ration cards with her. “We were told to 'shop to save shipping,'” relates Olwyn.

“We were told to 'shop to save shipping.'”

According to Olwyn, the wartime food system worked well but wasn't entirely without hitches. Some of those who could afford rationed foods were eating better than they had before the war; however, people's ability to supplement food rations with homegrown produce depended on the size of their gardens and how well they could mobilize help to cultivate it. “There was no manpower, because they'd been called up [for military service]—unless you had an older person” to help, explains Olwyn.

“People are astonished at how little we ate, but the diet we had was perfectly adequate,” Olwyn says, observing that obesity did not figure as the public health problem that it is today.

Now 94, Olwyn still feels deep admiration for Frederick James Marquis, a.k.a. Lord Woolton, for doing “the most amazing job” as the wartime Minister of Food—and the architect of Britain's rapidly overhauled food system.

“We never felt hungry,” marvels Olwyn. “It was Lord Woolton's diet that we had all through the war. He was made a Lord, but as I’ve always said, he could have been beatified.”

“It was Lord Woolton's diet that we had all through the war. He was made a Lord, but as I’ve always said, he could have been beatified.”

“It was Lord Woolton's diet that we had all through the war. He was made a Lord, but as I’ve always said, he could have been beatified.”