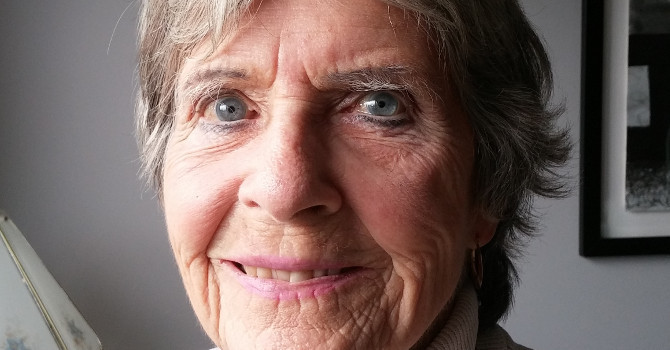 Pat Marshall, an 85-year-old retired teacher in Vancouver, Canada, is happy to share memories of growing up in the shadow of World War II in her native England.

She and her two siblings, a younger sister and an older brother, were living with her parents in rented council housing in Walsall, a mid-sized West Midlands industrial town known for its saddlery, leather, and metalwork. With children in most of the 10 or so homes on her side of the block alone, there was no shortage of playmates, Pat remembers. “We all played on the street—games like cricket, rounders—and knew everyone.”

As war dawned, Pat's family was struggling to make ends meet on the salary of her father, a former merchant navy officer who went on to work as a bus conductor. There were times when they couldn't afford coal to heat their home, and when there were no more coins to put in the meter for electricity for lights and the electric stove.  Each family member had only a few sets of clothes. Pat felt self-conscious of her fraying winter coat, which was later replaced by one made from an army blanket.

But with Walsall's factories just a few miles away being targeted by German bombers, there were more pressing concerns for everyone. “There was so much devastation in England with all the bombings,” relates Pat.

She remembers adults and children carrying gas masks with them everywhere, everyone having an identity bracelet on their person (to identify them should they meet harm), and of course the regular blackouts. These required every household to reduce their risk of being a target by obscuring every bit of light at night with masking tape or thick curtains, and they forced night buses to dim all lights inside and out—and in foggy conditions, for buses to creep along behind a conductor who walked ahead with a flashlight. She also recalls the metal railings from her school being torn out and contributed to the war effort, and the Anderson bomb shelters where people sought refuge in during air raids. “Although our town wasn't hit very hard, so many homes in Britain were destroyed. One house just about a block away from us was bombed. Luckily the family was safely in a shelter.”

Like many other families, Pat's family was caring for an additional child who was one of thousands evacuated during the months-long bombing campaign that came to be known as the London Blitz. But unlike in many wealthier families, conditions for Pat's family actually improved somewhat during the war. Jobs were plentiful, and Pat's mother went to work in a munitions factory. “Families like ours had more money, because women were able to go to work—but there was less to buy,” recalls Pat. That was because comprehensive rationing had been implemented by 1940 for key staples, like meat (including bacon), eggs (usually available in dried form), tea, and butter.

Unlike in many wealthier families, conditions for Pat's family actually improved somewhat during the war. Recalls Pat: “Families like ours had more money, because women were able to go to work—but there was less to buy.”

Before the war, the family's diet had been adequate but simple, and largely junk-food free. “But rationing was tough,” admits Pat. At times, weekly per-person rations of butter were as meagre as two ounces. When sugar was rationed, Pat decided to give her portions to her siblings. Many unrationed foods, like any kind of fruit, were hard to find. Homemakers would scramble to queue up (and have their kids do the same) when a rare food item, like cookies, arrived in local shops. Oranges, apples, and very occasional candies and chocolate bars were typically squirreled away to have “a few little extras” at Christmas. Those with means could turn to the black market for hard-to-find foods and little luxuries, like cigarettes. “Our family never did—we just didn't have the money, so it didn't apply to us,” she relates.

Pat Marshall [on right] and siblings during Second World War

There were grumbles about rationing, Pat says, and people weren't happy when it continued on key goods for years after the war. “Here we were calling ourselves the victors, and food was still being rationed. But what could be done?” Rationing was widely seen as necessary.

Pat also remembers stepped-up gardening efforts that followed the government's Dig for Victory campaign to engage more Britons in producing food. “A lot of people – including my family – dug up their beautiful front-yard flower gardens to plant vegetables. There was a double daylight-savings time so people could work two hours longer in their gardens. You'd see all the neighbours out digging at 11 p.m.”

“There was a double daylight-savings time so people could work two hours longer in their gardens. You'd see all the neighbours out digging at 11 p.m.”

Using a sieve to pull the stones out of marginal soils, Pat's family used their 500 square feet of garden to grow basics like cabbage, cucumbers, sweet turnips, and grains for the few chickens they raised in the back for eggs and meat.

“There was no great variety in our diets, and they didn't change much during the war. We never had much before the war broke out anyway!” says Pat. “But I can't say that I felt hungry, and I wasn't aware of people suffering for want of food even in our neighbourhood.”