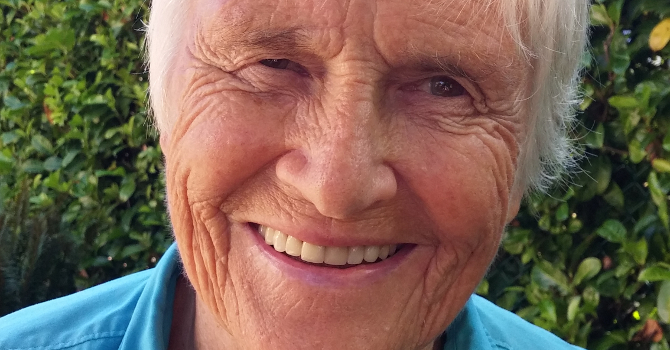 Shirley (née Rushton) Shebbeare, 84, smiles at the sight of a 1940s-era promotional poster that urged Britons to “Dig for Victory”. “I remember these,” she laughs. “[The government] put these on the buses and trams, and in the windows. There were a lot of them!”

The Dig for Victory campaign she's referring to was the massive British government-led effort to mobilize people and arable land for domestic food production—and stave off widespread hunger that would have certainly ensued from the interruption on food imports caused by the Second World War.

When war broke out, Shirley Rushton was five years old and living with her parents and older brother in a nice suburb off the Harrogate Road in Leeds. At the time, Leeds was one of England's major manufacturing centres for textiles and clothing, and heavy engineering.

Both of her parents were immediately affected. Shirley's mother, who had followed in the footsteps of her grandfather and aunt by training as a pharmacist, found herself needed at a nearby hospital that treated injured soldiers; a nanny took over care of Shirley and her brother. Shirley's father—who had been deemed unsuited for military service because of inoperable eye cataracts—had a stall in Leeds' Kirkgate Market, and had to quickly retool his business model.

“Before the war, he was mainly selling bananas from the West Indies and tomatoes from the Channel Islands. But [imports of] bananas were cut off—just like that, because of the war,” explains Shirley. “There was a huge area of the adjoining county of Lancashire, called the Fylde, where food was grown in glass houses: tomatoes, cucumbers, and lettuces, and such. So he became a wholesale fruit and vegetable merchant.” Fortunately, the Rushtons had a generously sized backyard, with flower gardens that they converted to their own “Dig For Victory” garden. “We grew a lot,” remembers Shirley, describing a raspberry patch, vegetables such as peas, radishes, and potatoes, and even some roses which her mother fertilized with droppings left on the street by any passing horses. “It was a lot of work, but there were also the weekends. Most people liked growing things.”

Rationing was also implemented. “We each had a ration book, with coupons in it for every kind of food... even candy, butter... and clothing, which were used for Dad's white coats at work and our school uniforms,” says Shirley. “Everything was in short supply.”

The family purchased less meat and more fish. They redeemed their ration coupons for butter and eggs at a small farm down the road, where young recruits to the Women's Land Army—another government-run food-production initiative—were helping to alleviate a war-induced shortage of farm labour. And with limited extra money, there was no eating out.

Although Shirley's parents were sometimes frustrated by the meagre weekly rations of staples like butter, they shunned the limited black market as an alternative source for controlled foods. “The British are for fair play,” Shirley says proudly. “They used to say that if Germany's leaders had played cricket, there wouldn't have been a Second World War.”

Luckily for the Rushtons, Leeds was hit less heavily than many British cities—although more than 70 civilians did perish in nine air raids. “We didn't get much bombing at Leeds,” Shirley remembers. “We used to watch the bombers, but they would go to Liverpool, where there were big munitions factories.”

After the war, Shirley continued the family tradition by pursuing her own career in medicine. She maintains that Britain's sweeping and rapid overhaul of its food system not only prevented widespread hunger but also paid unexpected health dividends.

"There was a huge drop in heart disease during the war ... Infant mortality, deaths of women in childbirth, and even diabetes dropped during the war."

“There was a huge drop in heart disease during the war,” she relates, noting that as a result, researchers began to uncover the association between it, cholesterol, and consumption of animal fats. “Infant mortality, deaths of women in childbirth, and even diabetes dropped during the war. The well-off had been overweight and eating too much sugar.”

Shirley emphasizes that, despite some inconveniences, the British food-system overhaul was essential. “I don't remember anybody complaining—I think it was a fair system.”