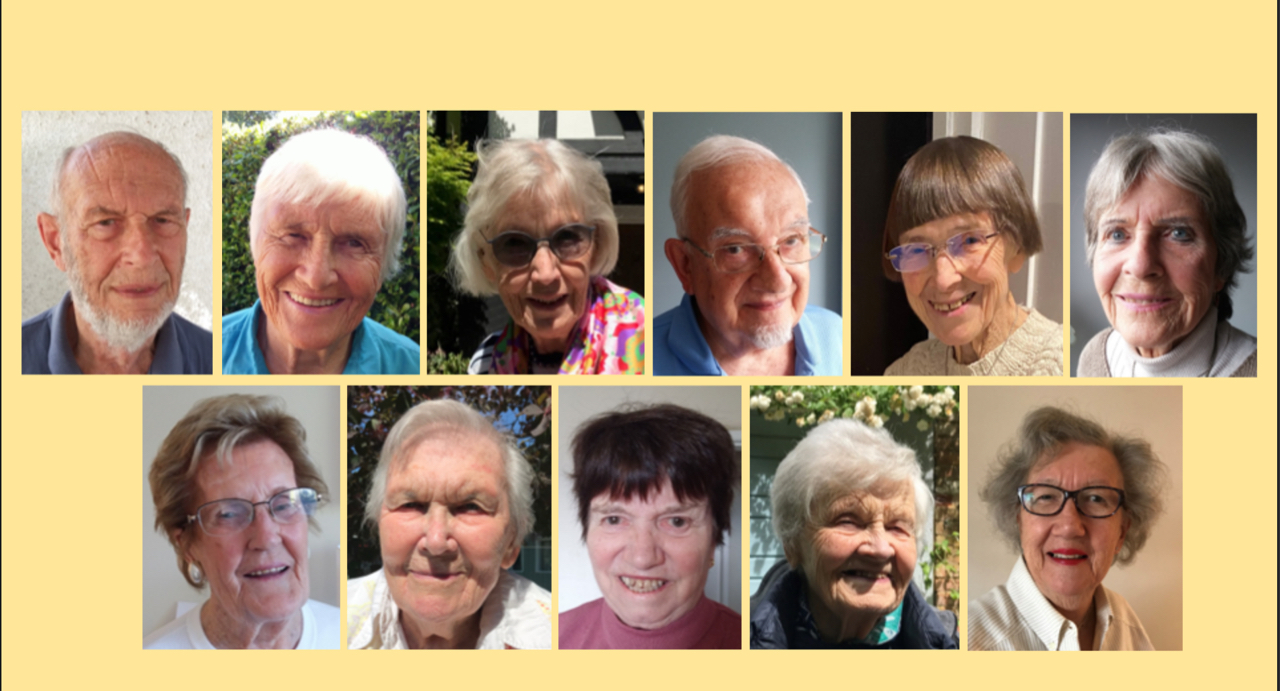 A special hello to members of Brock House seniors' activity centre in Kitsilano.

The images above are of some of the generous interviewees for my latest book Mobilize Food! Wartime Inspiration for Environmental Victory Today.  They're individuals who offered (or consented!) to share memories of food in wartime.  Every one of this group was a child during World War II, and most were then living in Britain.  Their memories were informative and moving.  You can read them on this website, at the section entitled Wartime Memories.

Brock House and its members kindly hosted me this morning as I presented on the topic of World War II food transition in Britain, with the title:  Food Systems can Change:  Stories and Lessons from Wartime.  I outlined the British government's bold wartime changes to agriculture and diets starting in the late 1930s, which everyone hoped would help feed the domestic population during the uncertainty and chaos to come.  British agriculture became more productive, and focused less on livestock and more on growing food directly for people. Food imports were slashed and families ate simpler meals with more locally-grown ingredients.  Rationing ensured that everyone got a fair share of bacon, butter, eggs, and other scarce edibles.

It is Possible to Feed Everyone

Though wartime eating was challenging, the programs kept everyone fed, helped improve morale, and increased the population's collective will to fight on until Nazism was defeated.

I also recounted stories from my interviewees, numerous of whom you see above. We all owe a debt of gratitude to that generation, members of which have been environmentalists all their lives from the conservationist habits they learned by living through crisis.

I then showed examples of food activism today that recalls some of that environmentalist wartime wisdom. There are civil-society organizations teaching youth how to grow food. There are activists liaising with governments to establish comprehensive programs for healthy food in schools. There's a growing movement to end factory farming, and to require that animal agriculture become sustainable (as well as kinder to chickens, pigs, and cattle). On another front, Brazil's 'Zero Hunger' project includes publicly-owned restaurants that are remarkably similar to the life-saving British Restaurants of WWII. In such restaurants, anyone can get a satisfying meal at a very low cost.

We can all be optimistic about these actions for a sustainable and just food system, and amplify the ideas in our networks and in our lives.

Discussion after the talk included suggestions from attendees about ways to minimize food waste. One participant recommended that more of us ask our grocers to please sell imperfect vegetables and fruits rather than toss them in the compost. Sometimes called "ugly fruit and veg," these are tomatoes, apples, and more that are perfectly edible but have a small knick or bruise. The idea of embracing imperfect food is catching on, as discussed in this Forbes article.

One attendee asked for suggestions on books and resources re: wartime food. I've written a separate blog post about that: Books on Wartime Food.