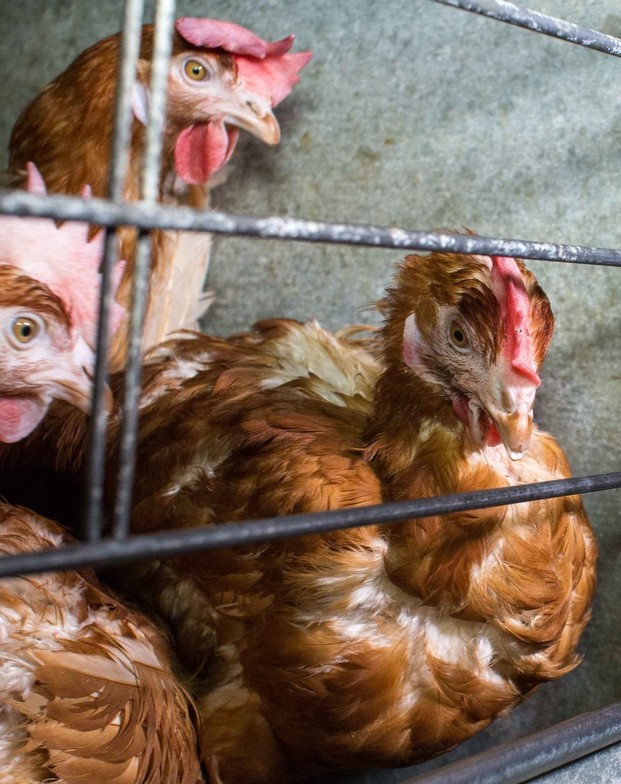 It’s true. According to the new study cited above, almost three-quarters of the antimicrobials used in the world (73% to be exact) are not directed toward human medicine, but are in fact used in animals raised for food.

If that surprises you, you’re not alone. When we hear about antimicrobial resistance (AMR) – a growing and frightening public-health problem – most of the accusing fingers point to overuse of antibiotics (and the broader category of antimicrobials) in human medicine. But that may not be the main source of AMR. Many of us know not to ask physicians for antibiotics when we have a common cold. Behind the scenes; meanwhile, antimicrobials continue to be used in large amounts on livestock intensively raised for meat and milk.

This has been going on for years. In industrialized countries, consumption of animal-source foods spiralled upward during the 20th Century, and producers adopted what seemed to be efficient methods. To turn out bacon and wings as quickly as possible, they crowded thousands of livestock animals into mass-production facilities with little or no sunlight, fresh air, or space to move around. In those unnatural conditions, antibiotics became standard tools for keeping the animals from getting sick. Drugs were used not only to treat disease in animals but to prevent it, and to promote speedier animal growth.

In Canada in 2017, the volume of antibiotics distributed for use for livestock was nearly four times the amount used in humans, according to the 2018 update of the Canadian Antimicrobial Resistance Surveillance System. Even if you factor in animal and human population size and average body mass, animals were getting at least 1.5 times as much AMs as humans in 2016.

Officials are aware of connections between unchecked use of antimicrobials in animals raised for food and growing resistance to antimicrobials used in the treatment of disease. Said the Public Health Agency of Canada in its 2016 Canadian Antimicrobial Resistance Surveillance System report: “There is increasing evidence that the use of antimicrobial agents in veterinary medicine and livestock production is an important contributing factor to the emergence and persistence of AMR in bacteria in humans.”

Antimicrobial resistance is already a medical crisis recognized by the World Health Organization. As outlined in a 2019 Canadian study, When Antibiotics Fail, more than one-quarter of infections are now resistant to the medicines that are generally first prescribed to treat them. In 2018, 5,400 people in Canada died as a direct result of AMR, and the national economy lost $2 billion due to the deaths and illnesses associated with resistant infections. More people will die in future, and more harm will be caused, if we don’t prevent what is really a preventable problem.

Cutting back on antimicrobials in animal agriculture

So what’s being done?

Use of antibmicrobials (AMs) for food-producing animals varies widely among industrialized nations. In some regions, like the European Union since 2006, antimicrobials are now banned for use supporting speedier animal growth. The European Parliament also recently voted to limit the use of AMs for disease prevention in animals produced for food, and to ban use of unprescribed AMs and human-reserve AMs in food animals. There and in other regions, including North America, meat producers report that their livestock are now getting fewer drugs – and evidence supports that.

Canada took some major steps forward in 2018, with a new regulatory regime that restricts how AMs can be imported, manufactured, labelled, bought and sold, and administered to food-producing animals. For example, feeds with antimicrobials cannot be described on labels as growth-promoting and producers raising animals for food now must get veterinary prescriptions for many drugs that are also considered important for treating disease in people.

For all these reasons, consumers now see food labels with claims like: “raised without the use of antibiotics.”

But is that enough?

A March 2019 federal audit of the coordination of Canada's AMR activities found limitations in AMR and AM use surveillance in "the coverage of commodities and farmed animals, thus affecting the understanding of trends in AMR across the food chain." It concluded that data from animal and human health need to be better integrated, and that key stakeholders see AMR management as under-funded. Similarly, the late-2019 When Antibiotics Fail study noted that Canada is still working out how to do effective, coordinated AMU surveillance in food animals and that Canada lags behind Europe in many respects. Insufficient data is being collected on AM use and AMR in aquaculture. Canada lacks a national system for reporting AMR in some important animal pathogens in animal agriculture, and national data are difficult to obtain. The Canadian Food Inspection Agency doesn't monitor imported animal products for resistant bacteria.

Of course there is also the reality that, in Canada at least, new regulations target how AMs are manufactured, classified, used, traded, and tracked – not the intensive-production conditions in which AMs have been so widely used. And as in any industry, we should also be asking whether prescribing veterinarians are well positioned to ensure robust, independent oversight of AM use in firms that see it tied to profits.

Elsewhere on the planet, and despite the imperative of reducing meat and dairy production to prevent catastrophic climate change, the problem is just ramping up. Low- to middle-income countries have recently begun adopting diets that are more centred on animal-source protein, and their use of antibiotics in industrial meat and dairy production has soared. That’s the context for the scientific article quoted at the start of this post. Here’s a meaty excerpt from that recent study in Science:

“The global scale-up in demand for animal protein is the most notable dietary trend of our time. Since 2000, meat production has plateaued in high-income countries but has grown by 68%, 64%, and 40% in Asia, Africa, and South America, respectively. The transition to high-protein diets in low- and middle-income countries (LMICs) has been facilitated by the global expansion of intensive animal production systems in which antimicrobials are used routinely to maintain health and productivity. Globally, 73% of all antimicrobials sold on Earth are used in animals raised for food. A growing body of evidence has linked this practice with the rise of antimicrobial-resistant infections, not just in animals but also in humans. Beyond potentially serious consequences for public health, the reliance on antimicrobials to meet demand for animal protein is a likely threat to the sustainability of the livestock industry, and thus to the livelihood of farmers around the world.”

How we can help

Governments need to implement much tougher controls and monitoring on antimicrobials in agriculture. For us citizens in industrialized countries, there’s plenty we can do: